BITGUN Review: A Rogue-Lite Light on the Rogue

Zombie-shooting fun, but with too much grinding.
“BITGUN is an action rogue-lite zombie shooter with difficult and satisfying combat you can learn and master. Guns break quickly and you lose all your gear when you die,” according to the game's Steam page. A pretty accurate description for this top-down point and click shooter. However, I’ve found it to be quite misleading. I don't know if I would call this game a rogue-lite. Typically in rouge lites there is a steady, noticeable improvement in how powerful you are and how powerful the hordes of enemies are. Usually, that gameplay is balanced by either giving the player more power the more they progress. Other times it’s mitigated by the player having to learn the ins and outs of each combat encounter. I find that games that strike a fine balance with both are the most successful. BITGUN, sadly, does not find that balance.
I did not regret the time I spent with BITGUN. On the surface level, it is a quick pick-up-and-play that would fit right at home on something like the Switch. The controls are responsive and pretty satisfying. Getting right up in front of a group of zombies and blasting them with my shotgun was always my personal favorite way to clear hordes. The UI is pretty simple, though I found myself actually kind of impressed with how much the game's interface actually makes sense. It's really easy to know when you're being poisoned without having to take your eyes off your character since your health bar turns green as your life is draining. And you can just tap ‘q’ to take a medkit until the poison damage stops. There were a couple of times when I was in intense situations with a horde chasing me while I realized I had been poisoned, and I was able to notice quickly without having to stop running.
The Zombie Splattering Is The Best Part 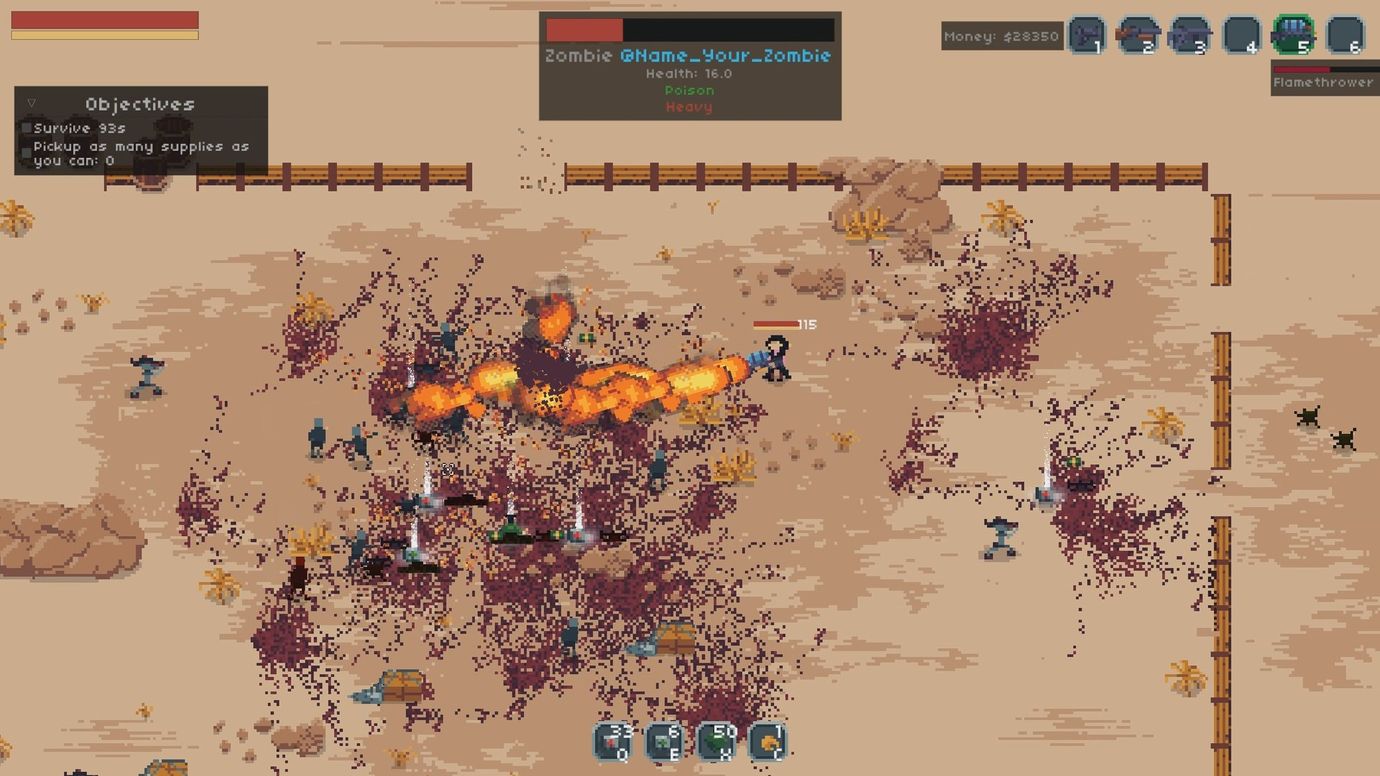 The game has all of the charming little details that make me gravitate towards smaller titles like this. The main camp area has a dog you can interact with. Your character, Penny, leaves a trail of blood whenever she walks over a dead zombie corpse. The glass shatter and barrel explosion sprites are really cool, but they don't serve any purpose since the game doesn't use the glass and traps in any cool way. These are all things I can appreciate when produced by a small team, and I would never discredit the two people who worked on this game just because this game doesn't have ‘incredible’ detail. They clearly are very inspired and want to make something that’s fast-paced, action-packed, and has a satisfying gameplay loop.
You may also like
By drakerencher|May 16, 2022
Loot River Review: A Satisfying Rogue-Like For Fans
Souls-likeRouge-LikeActionLooter
By LewisWilson|Apr 11, 2022
Elden Ring Players Discover A New Way To Easily Defeat A Major Boss
video gameselden ringdark soulsBloodborneFromSoftware
By cerebrobot|Mar 11, 2022
VTuber Ironmouse Becomes Third Biggest Twitch Streamer
twitchironmousestreamingvtuberninja
The Currency System Is Annoying 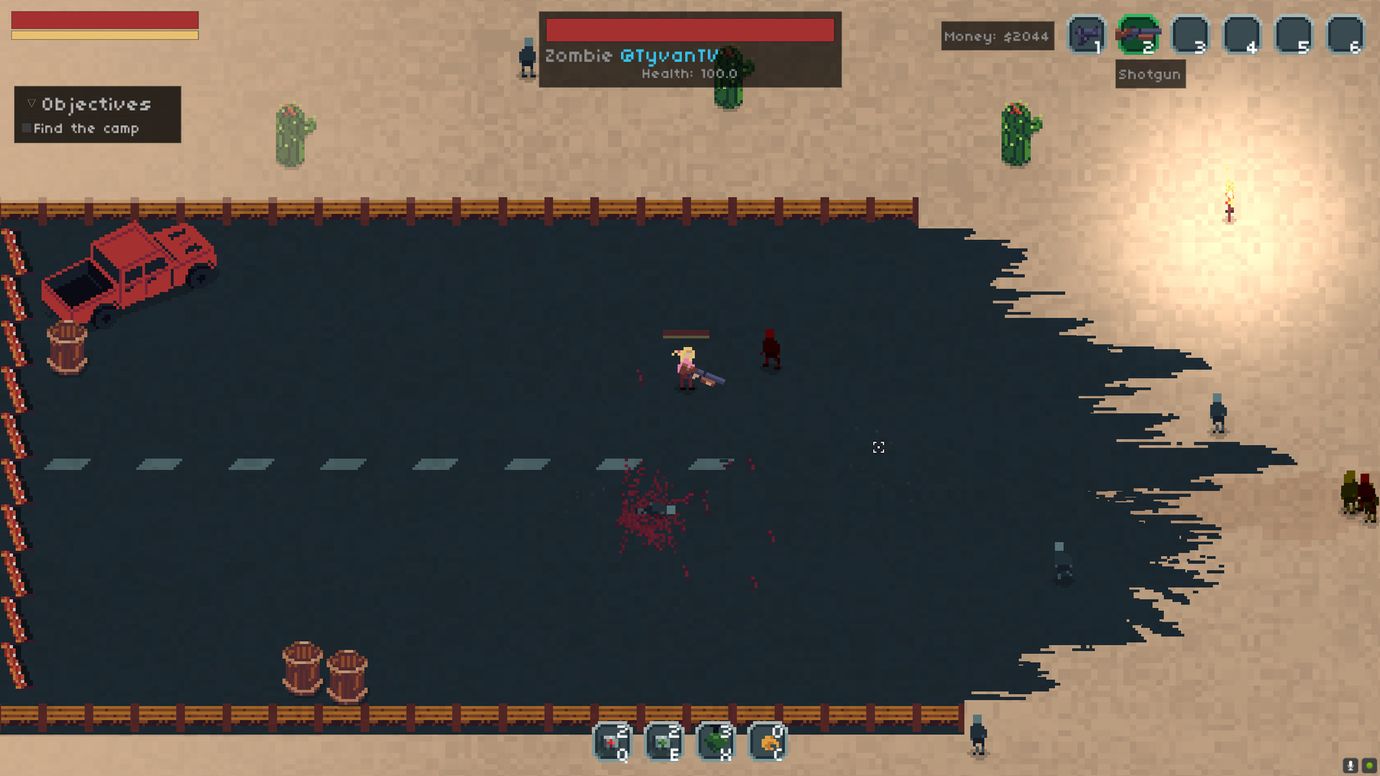 My problems mainly start with the in-game currency. The gameplay loop consists of slowly killing spread-out zombies one by one in the ‘Out Skirts’ until you earn enough money to play a level. Yes, you have to earn in-game cash in order to proceed with each level. In fact, everything in this game costs money. Weapons break very easily, which is not inherently a bad thing. But where it starts to become annoying is when you have to buy a gun, to go farm money, and while you're farming, that gun will also break. This means you now have to account for the money you're going to spend on another gun before you start a new level (which costs money). And if you die, you keep the amount of money you had, but you lose your guns (which you have to buy, again). This problem would be easily solved if you simply got more money for each kill. Or if guns were cheaper and dropped more frequently. You could also just add in more enemies that take more damage and drop more money. That way it would actually be fun to farm, and it wouldn't bring the game to a grinding halt when you have to resort to standing a little bit away from a zombie while unloading multiple pistol clips just so it can drop $200.
The game is at its best when it serves as a 2D top-down Doom - where you're just blasting through enemies, or you're trying to stay moving so you don't get cornered while a horde is chasing you. All while picking up money, medkits, and sometimes guns (if you're lucky). The game is at its worst however when you die really quickly (even with a body shield equipped). You'll lose all your weapons, and then realize you have to farm for about 10 minutes to get back to the level you want to play.
Now, if you've played the game you may be saying “Well you don't HAVE to farm in the Out Skirts. You can go back and play levels you already completed and just farm there”. Well, for starters, those levels also cost money after you beat them, and each one of those levels has a task to do that you can only complete one time. There's no fun reason to replay levels, so grinding for cash is once again a chore.
This doesn't account for the “Defend supplies” missions, though. These are easily my favorite part of the game, specifically the first one (since it costs the least amount to play). It just drops you in a big open area in the middle of dozens of zombies that move fast. It's fairly challenging and I wish other levels had a similar design.
So What's the Final Verdict? 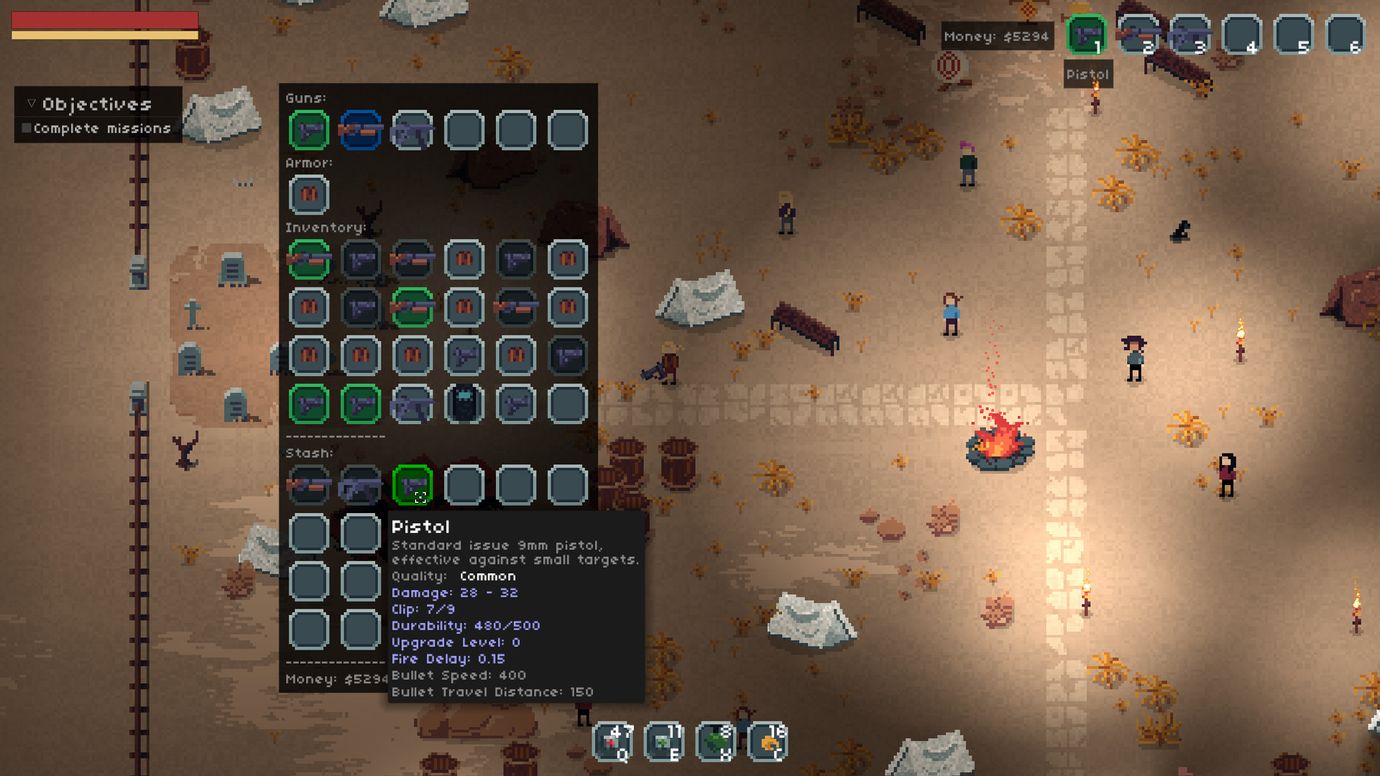 The developers, LogLog, are clearly very talented. In future games I hope that they can make something like BITGUN that doesn't feel bogged down by a poorly thought-out gameplay loop. The core gameplay of blasting zombies is actually a lot of fun otherwise.
5.5/10
By drakerencher | May 6, 2022
Share:
Tags: ZombiesShooterSteamDoom
You may also like
By drakerencher|May 16, 2022
Loot River Review: A Satisfying Rogue-Like For Fans
Souls-likeRouge-LikeActionLooter
By LewisWilson|Apr 11, 2022
Elden Ring Players Discover A New Way To Easily Defeat A Major Boss
video gameselden ringdark soulsBloodborneFromSoftware
By cerebrobot|Mar 11, 2022
VTuber Ironmouse Becomes Third Biggest Twitch Streamer
twitchironmousestreamingvtuberninja
More on reviews
By LewisWilson|May 11, 2022
Our Recap of May's Indie World Nintendo Direct
video gamesNintendo DirectIndie WorldHollow Knight
By BrandonNebitt|May 11, 2022
Chicken Police - Paint It Red Review: A Zany Noir Throwback
ps5video gamesreviewchicken police
By drakerencher|May 6, 2022
BITGUN Review: A Rogue-Lite Light on the Rogue
ZombiesShooterSteamDoom
By cerebrobot|Apr 10, 2022
Sonic the Hedgehog 2 Movie Review
video gamesmoviessonicsonic the hedgehogsonic 2
Popular