It's an ode to classic film noir and 90s adventure games...with a twist.
A black and white love letter to the noir genre, from Murder My Sweet to Cowboy Bebop, Chicken Police - Paint It Red doesn’t wear its influences on its sleeve so much as it swings from their chandeliers wearing one of those goofy rubber horse masks. Fans of dime store detective novels who can get past the absurd character designs will find a competently crafted mystery yarn to unravel. Just don’t expect more than one thread.
STORY PREMISE 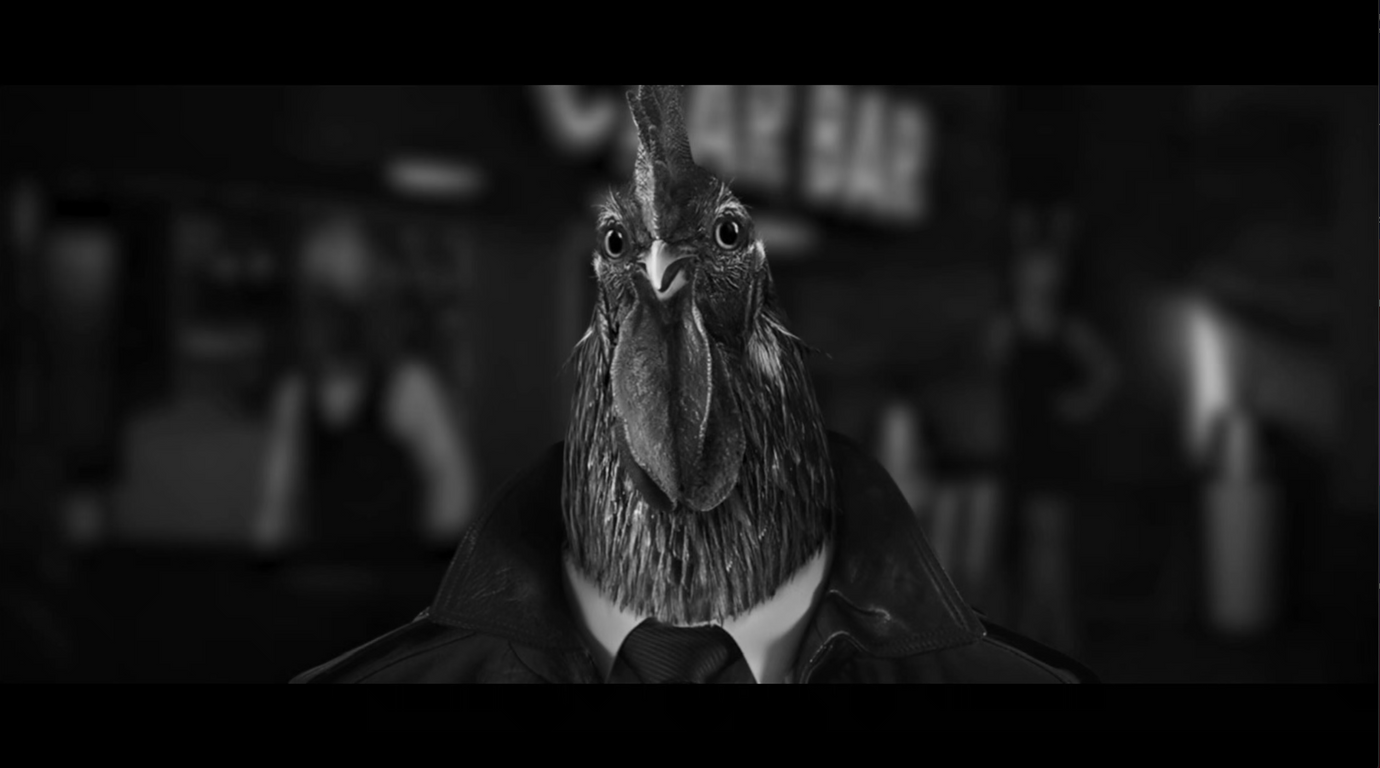 Suspended police investigator and...literal chicken Sonny Featherland comes home to his dilapidated apartment prepared to ring in the new year with a bourbon-induced coma. Instead he finds the door lock picked and a dame with more than just doe eyes standing in his dramatically darkened office. Over a glass of bourbon, the young woman tells you why she’s here. Her employer, Natasha Catzenko, has been receiving ominous threats. What follows is a kinetic tale of intrigue, murder and deception that twists and turns, but unfortunately never forks.
You may also like
By drakerencher|May 16, 2022
Loot River Review: A Satisfying Rogue-Like For Fans
Souls-likeRouge-LikeActionLooter
By cerebrobot|May 10, 2022
Xbox Is Getting Major Flack As Servers Off For Fourth Consecutive Day
GamingXboxvideo gamesmicrosoftdrm
By drakerencher|May 6, 2022
BITGUN Review: A Rogue-Lite Light on the Rogue
ZombiesShooterSteamDoom
PECK INTO MY OFFICE 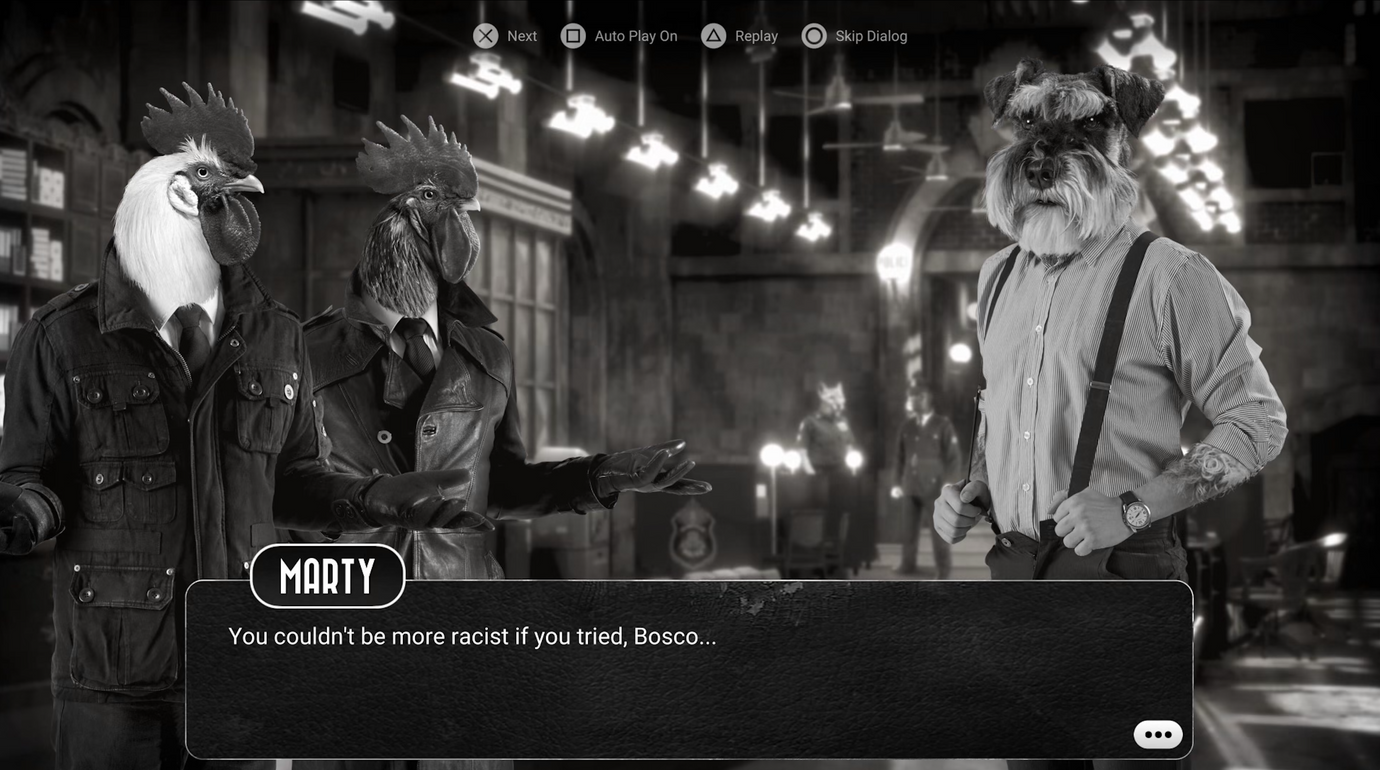 As you fast travel from one static location to the next via a map of the city, you’ll use your crosshair cursor to interact with various objects and characters. Holding down L2 takes all the guesswork out of this by highlighting everything in the scene you can interact with. This is meant to represent Sonny’s chicken vision, like Batman’s bat vision in the Arkham games. Interacting with each object will prompt some dialog from Sonny. Once you’re joined by your gun-horny ex-partner, Marty, you’ll get dialog between the two of them when inspecting things. You can even go back and interact with everything in the first couple locations you previously inspected solo and hear new dialog with both chickens, which is a nice touch.
Chicken Police is fully voiced, and the voice acting is great. Sonny and Marty’s chemistry is especially endearing, and I was always interested to hear their insights and banter. Most everything can be clicked on two or three times for additional dialog, and this is worth doing, not just for the character interactions, but the codex entries as well.
Interacting with characters opens an interaction wheel with four icons. Observe them from afar to get your characters’ thoughts about the person. Talking to them often opens a list of topics you can ask them about, which in turn provide useful notes and codex entries for your journal. But all of this is just foreplay for the main gameplay mechanic: the Questioning.
THE QUESTIONING 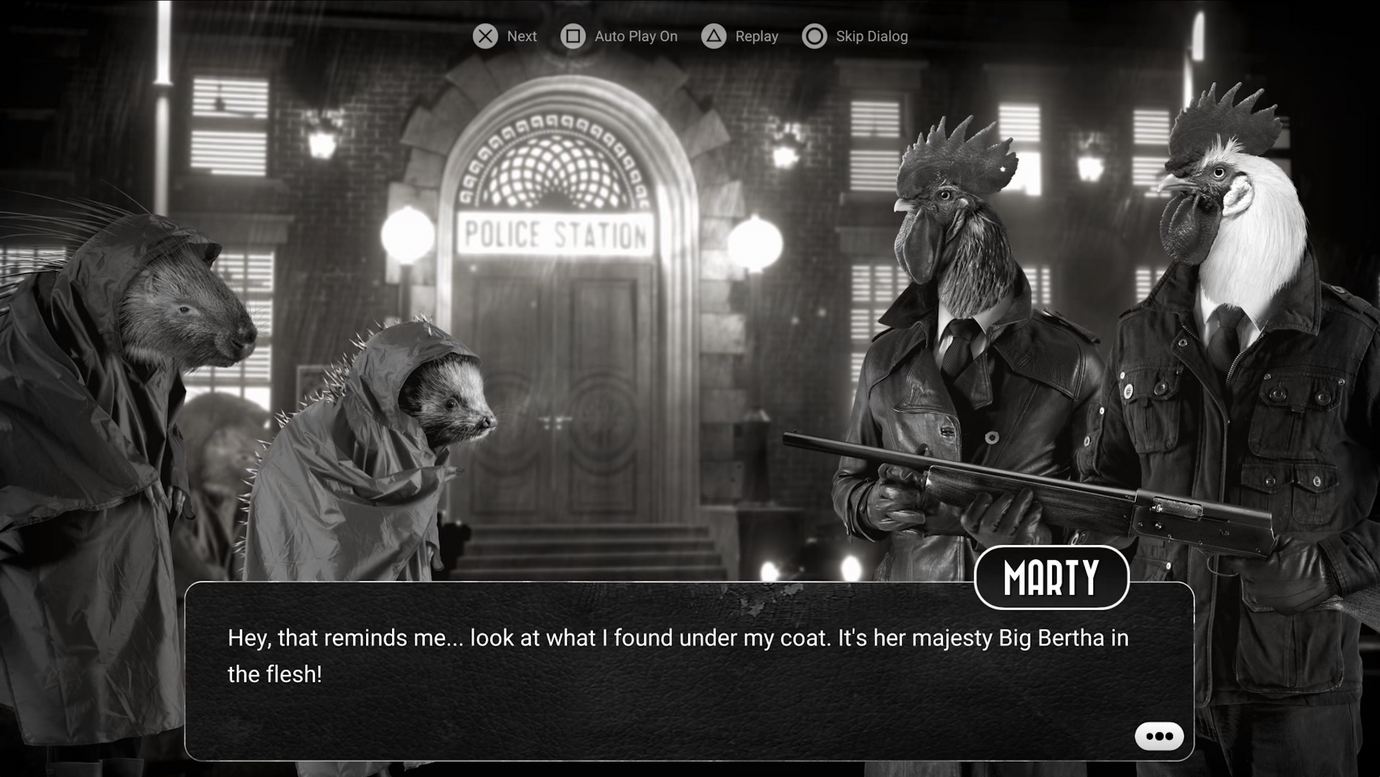 Interrogations, or Questionings, as they’re called, initially seem like a deep and interesting system. The game even sees fit to provide cutely illustrated instructions on how they work. By gathering impressions and sticking to the focus of your line of questioning, you fill the Detective Meter, which acts as a visual representation of how much the animal you’re interrogating trusts you. Stray from your focus by asking irrelevant questions, and the meter goes down. You’re given a choice of one to three questions at a time, and once you’ve asked all the questions, you receive a star rating on your question accuracy. This sounds cool, right? Like you’re being a detective. A chicken detective! I thought so, too.
I got a 40% on my first Questioning. 3 stars. Not bad for not knowing what the cluck I was doing, but I sure wasn’t feeling like a legendary detective. There’s no visual indication of which dialog choices you should make, and I never really understood why some questions resulted in positive points and others negative. But I’m a role player, dammit. Not wanting to disrupt the pacing and flow of the story, and determined to live or die by my own wits and investigative skills, I ignored the option to replay the questioning, and continued on. Surely, I’d find my groove.
I DID NOT FIND MY GROOVE

During my ten hour playthrough, the Questioning mechanic never clicked for me. I felt just as inept an interrogator in the final Questioning, with a gun to my head, as I was in my first Questioning with a bourbon in my hand. But I made it to the end! I solved the case! And despite some tedious string connecting minigames and never quite getting the hang of interrogations, I enjoyed my time in Clawville. It wasn’t until the credits rolled and I jumped into a new game that I realized my true frustration.
STICK A FORK IN THE ROAD, IT’S DONE

At the start of the game, you retrieve your revolver and a fake badge from your desk drawer. Neither of these things is ever used in a meaningful way, and they represent my biggest issue with the game: An absence of choice and consequence.
You aren’t allowed to leave without taking these items. You won’t find yourself in a sticky situation later, where you’ll wish you’d brought your gun. You’re never given a choice between multiple ways to approach a situation, puzzle, or objective. You’ll never have to wonder if you should have shot the villain, or if there was a peaceful solution. If you make it to the end of the game, and you clicked on all the things, you saw it all.
NO BUGS ALLOWED 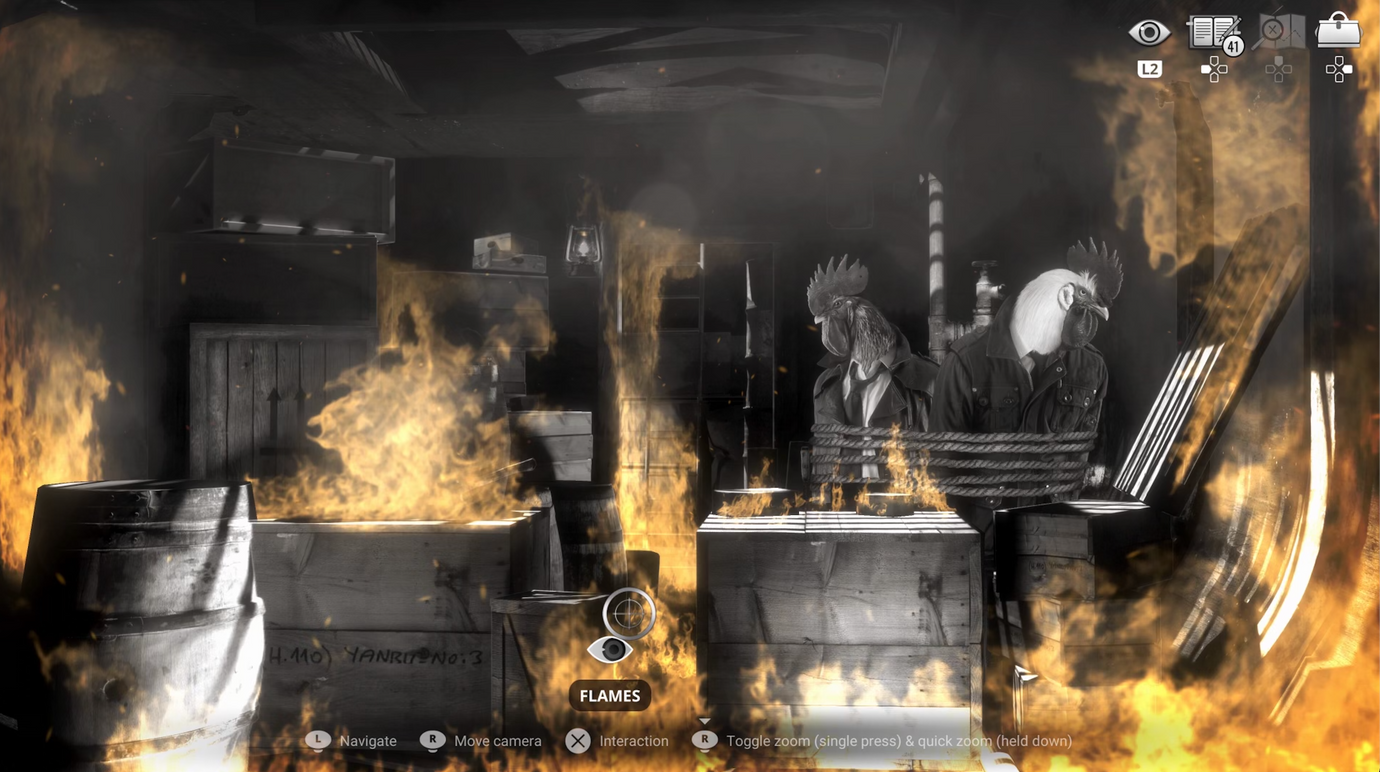 Clawville is painted as a melting pot on the verge of boiling over, but Chicken Police is more Zootopia than Blacksad in its approach to race politics. The animals that inhabit Clawville aren’t caricatures of real people. They’re a literal race of animal headed humanoid creatures. Predators and prey that now live together in tentative harmony as a result of the decades long Meat Wars that wiped out 80% of the world’s population and led to the advent of meat substitutes to quell predation and cannibalism among the remaining populace. Like in Zootopia. This surprisingly deep worldbuilding belies one of the problems I had with the game’s tone.
Standing outside the Hop Dog diner, gazing at the lopsided black mound off in the distance, Sonny and Marty ruminate on how shitty it is those poor bug bastards have to live there. Racism sure is messed up. Yep. Well, let’s go inside and hassle a trash panda. Racism is a central theme in the game, and yet Chicken Police never manages to comment on it in a meaningful way. We’re told about the horrible living conditions in the insect ghetto known as the Hive, but just like Sonny’s disgusting bedroom or Zipp’s filthy kitchen, we never have to look at it.
As much as I’m into the idea of the Clawville police chief being a racist dog that would rather all cops be dogs, and porcupines and chickens calling each other pincushions and featherdusters, I can’t help feeling like Chicken Police really wants to say something profound about racism, but doesn’t want to say the bugs are supposed to be brown people.
HOW DID THE CHICKEN CROSS THE ROAD? 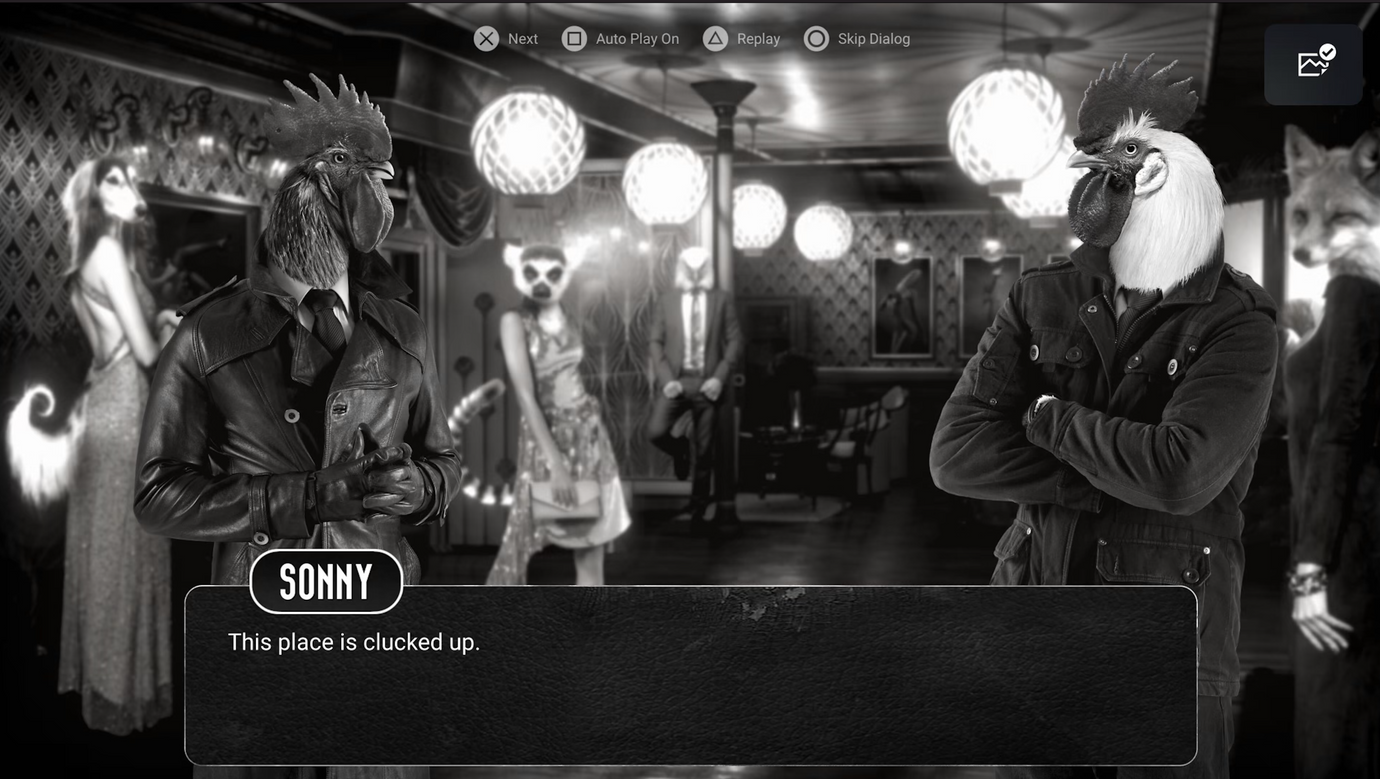 Visual novels have the potential to offer a level of player choice and narrative freedom far beyond AAA titles like Mass Effect and Fallout for a fraction of the production cost. So I was disappointed to discover Chicken Police has no branching story paths and only one ending. Collecting all ten Chicken Police paperbacks hidden throughout the game rewards you with a very brief additional scene after the credits, but that’s it.
For a $20 indy, I don’t expect a fully animated point and click adventure game with tons of puzzles and a complex web of fail states and numerous branching narratives. But for a visual novel, Chicken Police offers less agency than a choose your own adventure book.
Maybe you think I’m being harsh, or overly critical of a budget title from a small team, and that I should just take the game for what it is. But what’s frustrating is how easy it would be for Chicken Police to offer the experience I want. All it had to do is let me make mistakes, and offer an entertaining little cutscene showing the consequence of my poor choices. If I can hospitalize my little sister and be sent to military school in Willy Beamish, I should be able to shoot my racist dog boss and be sent to prison for murder in Chicken Police.
6/10
Chicken Police - Paint It Red is available now on Xbox Series X and Series S, Android, iOS, Microsoft Windows, macOS, Google Stadia, and PlayStation 5.
By BrandonNebitt | May 11, 2022
Share:
Tags: ps5video gamesreviewchicken police
You may also like
By drakerencher|May 16, 2022
Loot River Review: A Satisfying Rogue-Like For Fans
Souls-likeRouge-LikeActionLooter
By cerebrobot|May 10, 2022
Xbox Is Getting Major Flack As Servers Off For Fourth Consecutive Day
GamingXboxvideo gamesmicrosoftdrm
By drakerencher|May 6, 2022
BITGUN Review: A Rogue-Lite Light on the Rogue
ZombiesShooterSteamDoom
More on reviews
By LewisWilson|May 11, 2022
Our Recap of May's Indie World Nintendo Direct
video gamesNintendo DirectIndie WorldHollow Knight
By BrandonNebitt|May 11, 2022
Chicken Police - Paint It Red Review: A Zany Noir Throwback
ps5video gamesreviewchicken police
By cerebrobot|Apr 10, 2022
Sonic the Hedgehog 2 Movie Review
video gamesmoviessonicsonic the hedgehogsonic 2
By CiprianG|Jan 7, 2022
Nintendo’s EShop is Having a Huge Sale
NintendoSaleEshop
Popular