You don't get to 1000 defeats without denting a few pots.
"let me solo her" has easily become one of Elden Ring's most famous players in just a handful of weeks, and now they've officially beaten one of the most difficult bosses in the game, Melania, 1000 times.
let me solo her Is A Reddit Superstar 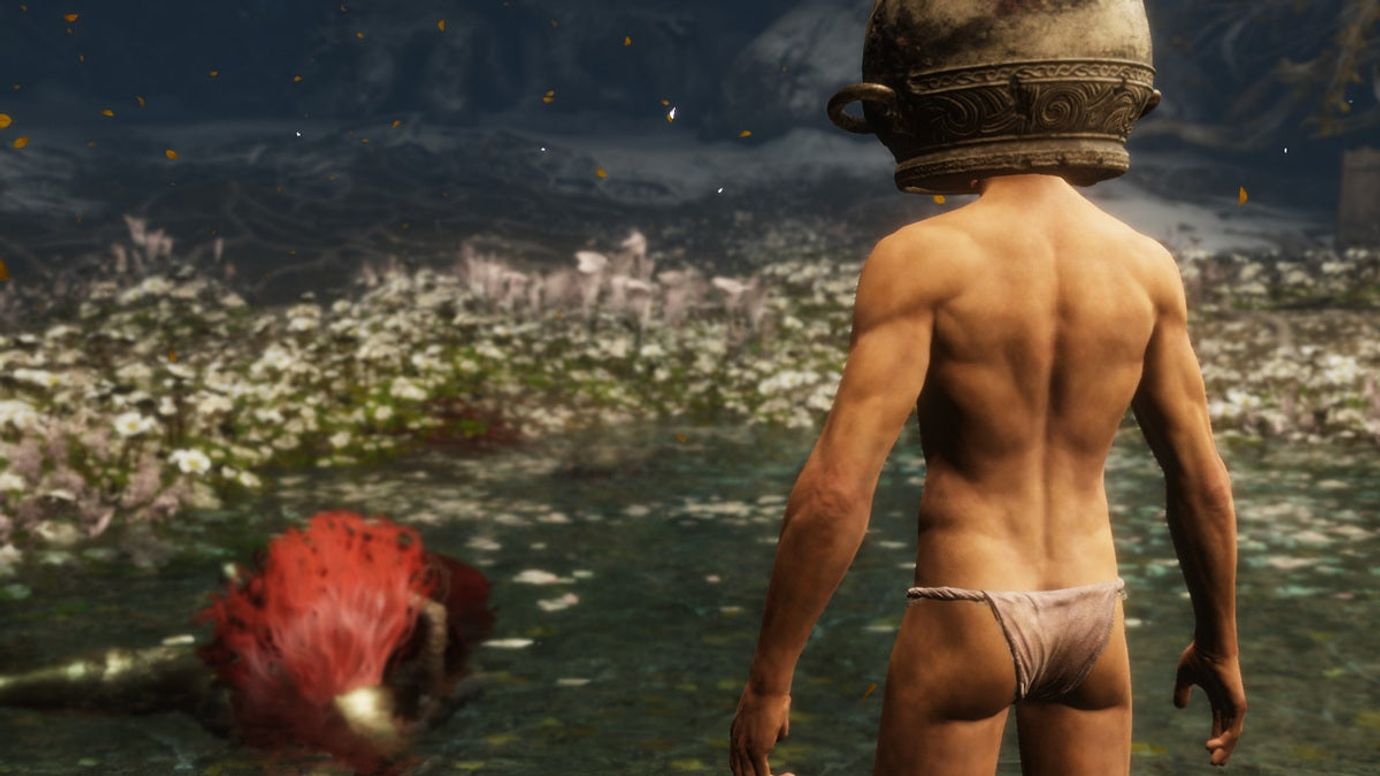 If you don't know, about a month ago people started talking about a particular player on the Elden Ring subreddit. The player's name was 'let me solo her,' and they fought completely naked wearing nothing but a pot on their head and dual-wielding two katanas.
let me solo her gained notoriety for their flawless skill in the game, plowing through some of the toughest bosses without even taking one hit of damage, as well as their obviously attention-grabbing choice of avatar.
You may also like
By MikeBedard|Apr 20, 2022
The Latest Elden Ring Patch Is Full of Goodies
video gameselden ringpatch
By LewisWilson|Apr 11, 2022
Elden Ring Players Discover A New Way To Easily Defeat A Major Boss
video gameselden ringdark soulsBloodborneFromSoftware
By tennysonh|May 2, 2022
The Absolute Hardest Kingdom Hearts Boss Fights
video gamekingdom heartsboss battlehardest bosses
People Make let me solo her Fan Art Soon, posts about let me solo her were jumping to the top of the subreddit, and people became obsessed. Players started to create tons of fan art - drawings, 3d models, etc - of lmsh's avatar.
But there was one thing that became clear. let me solo her chose their name for a reason - because they wanted nothing more than to fight the game's toughest boss, Melania, over and over again. And that's just what they did.
let me solo her Goes For the Gold With Melania let me solo her began playing through the game over and over again just to fight Melania - they even helped other players work out strategies for fighting Melania, and just generally became the running strategic expert on the boss.
Eventually, people caught on to let me solo her's streak of Melania wins, and in turn let me solo her began live-streaming their Melania-battling exploits.
1000s Times Is a Lot of Boss Battling Just this week, 7,000 people tuned in as let me solo her defeated Melania on a live stream for the 1000th time. The match went fairly quickly, with lmsh expertly dodging and weaving around Melania, getting in hit after hit but taking no damage.
Eventually, however, lmso slipped up and took some damage from Melania. Towards the end of the fight, lmsh was down to 10% health. One more strike would lose the battle for let me solo her, and their Melania-smashing streak would come to an end. However, without breaking a sweat lmsh pushed through and defeated the boss.
1000 defeats. Wow. That's a lot of Melania.
By cerebrobot | May 13, 2022
Share:
Tags: streamersvideo gameselden ringnewslet me solo her
You may also like
By MikeBedard|Apr 20, 2022
The Latest Elden Ring Patch Is Full of Goodies
video gameselden ringpatch
By LewisWilson|Apr 11, 2022
Elden Ring Players Discover A New Way To Easily Defeat A Major Boss
video gameselden ringdark soulsBloodborneFromSoftware
By tennysonh|May 2, 2022
The Absolute Hardest Kingdom Hearts Boss Fights
video gamekingdom heartsboss battlehardest bosses
More on streamers
By cerebrobot|May 13, 2022
Mega Elden Ring Player, Let Me Solo Her, Defeats Elden Ring's Hardest Boss 1000 Times
streamersvideo gameselden ringnewslet me solo her
By cerebrobot|May 6, 2022
Twitch Is Considering Cutting Streamer Pay to Make More Money
twitchstreamersvideo gamestwitch streamers
By cerebrobot|Apr 12, 2022
Massive Streamer, IShowSpeed, Banned From Valorant For Unearthed Tirade
Valorant
By cerebrobot|Mar 11, 2022
VTuber Ironmouse Becomes Third Biggest Twitch Streamer
twitchironmousestreamingvtuberninja
Popular